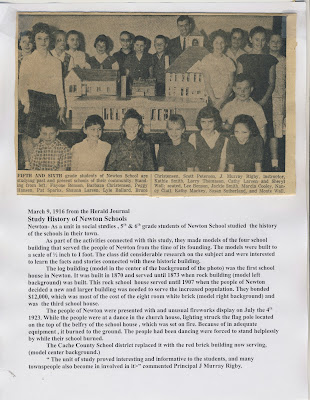 LAUREN IPSUM, A fun book written in a fantasy style

BOOK REVIEWLAUREN IPSUM, A fun book written in a fantasy style, which is fun toread. Lauren is lost in Userland. She knows where she is, or whereshe's going , but not at the same time. The only way out is throughJargon-infested swamps, gates guarded by perfect logic, and the perilsof breakfast time at the Philosopher's Diner. With only her wits andthe help of a colorblind chameleon, Laurie must map her own way home.THE STORY ABOUT COMPUTER SCIENCE AND OTHER IMPROBABLE THINGS.A fun book for third grade and up to high school , any one interestedin computer programing or just fun reading. Catch it at the NewtonTown Library

"Our vision is to fortify families by celebrating
commitment, popularizing parenting, validating values, and bolstering balance."

We are Richard and Linda Eyre. For more than 30 years we have been for parents on families, life-balance, and parenting. We have published with Random House, , St. Martin’s Press, Deseret Book, McGraw Hill, and Penguin, but we have just found a publisher that we like better than any of them.

It is avoiding all the middlemen and getting books to those who want them for free.

And it is getting them to people quicker, with more interaction and more feedback for us.

We hope you will like this approach as much as we do! Here is our new philosophy of what books should be in today’s world and our new mission statement about how we hope to make it happen:

Make each of our books (some four dozen in all) available on three levels:


How is it possible?


It’s possible because these are our books, we own the copyrights, and we are more interested in getting them to the maximum number of people than in making them generate the maximum amount of money.

Why are you doing it?


Parenting is difficult today—harder and fraught with more challenges than at any time in history. Owner’s manuals don’t come with kids, and most parents don’t have time to analytically and deliberately calculate a family and parenting strategy to match the needs of their kids and the trauma of our times. We have been able to do exactly that analysis and strategizing because of the freedom and access that some of our have given us.

Because books have been good to us, we are now at a point where we want to give back, and to give their content to the growing number of parents who need help. We think families are the basic unit of our society and of our economy and we believe that the most important work anyone does is within the walls of his or her home and that no other success can compensate for failure in the family. Thus if anything we have learned, or done, or written can be of help to parents trying to do their best by their children…we are happy to give it.

How will it work?


We already have nearly half of our books transferred here—to this site. They are completely free and are only a click away. If you don’t mind reading on line and on a screen, they may be the only copies you will ever need. If you like to read on a kindle, you will soon be able to download them from Amazon for $2. And if you want them as books, we are working to make them available in special, non advertised personal editions for $5.

Click here for a list of free books from the Eyres
Posted by JR at 9:10 PM No comments:

Book review for October HEROES WITHOUT GLORY by Jack Schaefer

Book review for October
HEROES WITHOUT GLORY by Jack Schaefer
What a great book. Historically the bad guys are renounced while the good guys tend to be lost in their long shadows. Below just a caption of a few of them.
What a great book, I enjoyed it thoroughly, any one from 13 to 100 would enjoy it.
James Capen Adams a one time eastern shoemaker became Grizzly Adams. He took in twin grizzly cubs about 3months old. He named the female Martha Washington and the male Benjamin Franklin. He trained them to be pack animals. Imagine what a stir he made in San Francisco dressed in buckskins and two 800 pound tame grizzlies walking down the street. 1807-1860.
John A. Thomson came from Norway, and longed for his mountains of Norway, eventually he moved to the Sierras and found his mountains. He was a big strong man who enjoyed a blizzard . Their was a need of a man to get mail over the Sierras in the winter time. Often the snow was 15 feet deep , eventual he remember the Norwegian snow shoes. He made a pair what they called snow skates, he whittled them out of oak, they were 10 feet long and 4 inches wide and nearly an inch thick. They weighted 25 pounds this plus his mail bag of 40 pounds or more. No one to show him how to use them he stumbled , he flounder , he fell . He kept on until they were like wings on his feet. Thus skis were brought to America, he modified the skis latter and loved to teach children how to ski. What a debt we in Utah owe this man “SKI UTAH”. A great story.